5 NFT Stocks to Capitalize Off the Digital Craze 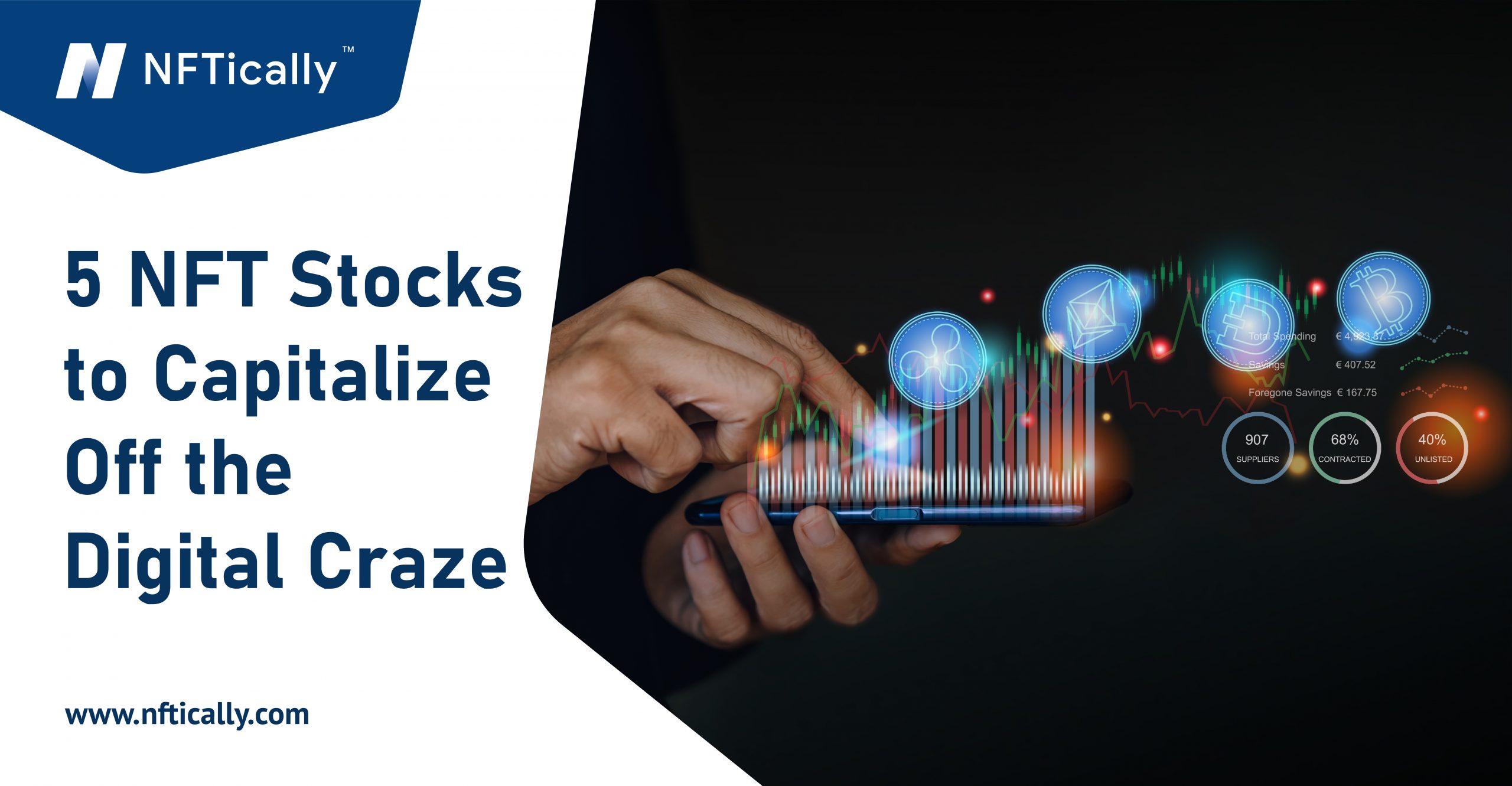 Earlier this year 2021 NFT sales surpassed $2 billion. which widespread the belief that the bubble was ready to collapse. After that, sales continued to grow. And growth isn’t slowing down anytime soon. Having said that, NFT markets may be tough to navigate. It is difficult to find a good price. But, you don’t have to be an art connoisseur to profit from NFTs. You do not have to invest in genuine NFTs. That is the purpose of these NFT stocks.

Let’s start with the fundamentals. NFTs can apply to a wide variety of digital assets. Among the most prominent is Beetle’s digital collage, which sold for $69 million at a Christie’s auction. They might, but, be video clips, music, sports souvenirs, or even video games. The important element here is that the stored NFT data is on a digital ledger. And that ledger confirms that the NFT in question is one-of-a-kind. That is crucial in this case. Some people are ready to pay a high price for the authorized version. But not the screenshot or audio-ripped copy.

Now that Wall Street has recognized that there is money to earn in NFTs. This made it much simpler to determine which NFT stocks are in the best position. Particularly given the fact that there are fewer of them. Even though hundreds of firms are attempting to enter the NFT market. Some are in a stronger position than others.

Investors got a glimpse last time when DraftKings went publicly. There’s a valid explanation behind this. DraftKings had a 60 percent share of the sports betting industry at the time of its IPO. Customers may choose between fantasy sports, traditional sports betting, and iGaming. Like Funko, the company’s sales have risen from year to year. A staggering 297 percent increase in the company’s revenue during the second quarter. Net losses, on the other hand, decreased by 51.8%. DraftKings appears to be a solid investment now.

The DraftKings Marketplace, which was lately created, elevates it to the status of top-tier NFT stock. Digital treasures can be bought and sold here by enthusiasts. It’s a lot like collecting baseball cards, only it’s digital instead of actual. There’s already a sizable market for this, as well. The inaugural Chicago Bulls NFT collection sold out in 90 seconds after it is released. It will be one of the top NFT stocks to invest in if DraftKings comes early into NFTs. which also helps it to control the market on sports memorabilia.

One of the most well-known toy brands is up next. Since Barbie, Hot Wheels, American Girl, and UNO came to the market by Mattel, the company has become synonymous with famous toys like those mentioned above. The company isn’t resting on its laurels. The corporation has launched NFTs based on some of its most renowned brands. But with great success. This demonstrates that the organization is keeping up with current market trends. And also inventing and upgrading the way it communicates with its consumers.

Mattel’s recent sales have been good. First-quarter net sales totaled $874 million for the corporation. The sales of Barbie dolls increased by 87% in a single year. Introducing a Barbie NFT might be a game-changer if the corporation decides to use the success of its Barbie line to debut the NFT. It is just a matter of time before we get our hands on a Barbie NFT. When that time comes, Mattel will be one of the top NFT companies to buy.

This is the most valuable firm on our list. Twitter isn’t the first company that comes to mind when you think about NFTs. Most people will remember it as the microblogging site where they can yell at one another… And from time to time, I’ll impart helpful knowledge. For $2.9 million, CEO Jack Dorsey sold his first tweet as an NFT, although he’s been experimenting with the NFT market since last year. And there, it appears, was the spark that ignited the fire. Twitter revealed shortly after that it was going into the NFT manufacturing industry. The announcement comes with a tweet.

NFTs have also been used by other celebrities to try to make money off of their tweets. On Valuables, Mark Cuban sold a tweet for a total of 0.56 Ethereum. In any case, Twitter is securing a noteworthy position in the NFT industry. Twitter, if it takes off, might have a significant impact on NFT collectability. As a result, Twitter is now one of the top NFT stocks accessible right now.

Pop culture collectibles are probably how you’ve heard about Funko. Despite its youth (the firm was created in 2017), this one has already proved to be nimble in the face of market unpredictability. It hopes to build on that success with its venture into NFTs. The company’s sales increased by more than 140% in the second quarter. And the business hopes to keep things moving in the right direction.

So far, it has generated the most revenue per share on top. Sales in the second quarter had increased from the last year. Its above 2019 levels, demonstrating broad-based momentum across our products, channels, and geographies.

Token Wave is a company that tracks NFT holdings. They recently announced that Funko has bought a controlling interest. Also, Funko Digital Pop NFTs introduction as part of the company’s product range. Each bundle costs only $9.99. The WAX platform, a decentralized entertainment network, now offers them for sale. Even before Funko reached the NFT zone, the stock was a popular commodity. However, the inclusion of this new source of revenue elevates it to the status of one of the most promising NFT stocks available currently.

Cloudflare has become one of the most valuable IT businesses in the world with no ties at all. Even though it isn’t a household name yet. Since the outbreak of the pandemic, the company’s market capitalization has doubled. And it’s just going to get stronger from here. The cloud computing platform at Cloudflare is the company’s mainstay. In this package both sector cloud services, high-level security solutions are in place. It also provides a wide range of tools for improving corporate performance. Content delivery bundles, software development kits, website creation, analytics tools, and a tonne of other things are all available through this service.

Cloudflare Stream supports NFTs but the company has made an appearance on the Top list of the NFT stocks. If you’re not familiar with Cloudflare Stream, it’s a video streaming acceleration service. It’s also less expensive than a lot of the alternatives. But, given that this platform allows NFTs to be embedded, content providers may do so in their videos as well.

This can help producers send their media more effectively via the internet. Though reaffirming their ownership rights to such works. Maintaining copyright on content has never been easier than it is now. This might become the gold standard for video sharing for content providers if it takes off. If Cloudflare maintains its lead in this area, it will be a top NFT stock to own.

Blockchain was a game-changer when it was new, but now NFTs offer similar potential. Also, they are gaining popularity. As of the beginning of 2021, collectors’ interest in these coins has risen. And this curiosity shows no signs of waning anytime soon. For this reason, investors should support the NFT stocks which are available.